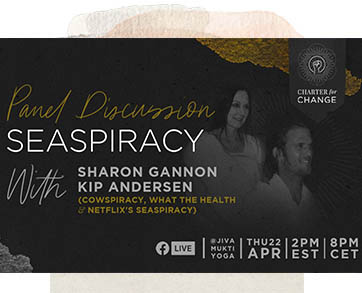 Many of you know that Jivamukti’s Birthday is Earth Day, so how perfect that we are holding our next panel on Environmental Consciousness with the producer of NETFLIX’s new film, Seaspiracy, (He’s also a Certified Jivamukti Yoga Teacher!), along with Jivamukti founder Sharon Gannon, and Hari Mulukutla, CEO of Jivamukti Yoga.

Kip Andersen, environmental awakening came as a result of An Inconvenient Truth. After seeing the film, he began to recycle religiously, turn off lights constantly, shower infrequently, and ride a bike instead of driving. Andersen believed he was doing everything he could to help the planet by following the guidelines of national and international environmental organizations, but his life took a different direction when he found out animal agriculture is the leading cause of environmental destruction. He is the founder of AUM Films and Media, a 501c3 non-profit focused on creating films and media that promote thrivability, compassion, and harmony for all life. He co-produced the films. COWSPIRACY: THE SUSTAINABILITY SECRET and WHAT THE HEALTH. And with NETFLIX, he has just produced and released the 2021 documentary SEASPIRACY.