The evolution of consciousness through the doors of perception

The Sanskrit word chakra means wheel. A wheel rolls, turns and, by means of cyclic or circular movement, takes one on a journey. This journey occurs in space and time, and thus it is eventful, but it also may propel the traveler beyond the limits of time and space. Who is this traveler we speak of? Consciousness is the traveler.

Kundalini is a Sanskrit term (literally meaning “coiled snake”) referring to this consciousness, which is identified with the jiva (individual soul). So it is not super-consciousness, but the limited consciousness of an unrealized soul.

Kundalini is moved from a dormant state by life’s experiences. The desire for experience propels the soul. Like the flames of fire, this journey moves upward. The soul is always moving toward super-consciousness, or the enlightened state, whether it is aware of its destination or not. But awareness can accelerate the awakening.

The various levels of cognition that kundalini goes through to gain consciousness are referred to as chakras. With the ascent of consciousness, perception expands. The journey is an evolving one, and with each new level of awareness gained, the previous chakra continues to function and expand.

Consciousness lies dormant at the root center or base of the spine. This is the site of muladhara chakra. Mula means root. The priority here is physical preservation. When you perceive reality from this level, you are concerned mainly with the basic necessities of life: food, shelter and safety. Money is a prime interest. Grounding in the material world is necessary if one is to move upward toward full spiritual realization.

Once the basic needs and responsibilities are taken care of, consciousness evolves toward sexual and creative expression, which is what the second level, swadhisthana chakra, is concerned with. This creative expression can be in the form of art and/or procreation. After there is creative experience then comes the identification with ego and the quest for power, which is the concern of the third chakra: manipura.

This force can manifest itself as the quest for worldly success through the acquisition of wealth or fame, or by trying to control others or the environment. Most souls spend their entire lives without ever evolving their consciousness past these three chakras, or levels of awareness. Those who do so are motivated by a desire to be of benefit to others. Compassion, not selfishness, guides their lives, and then consciousness is said to reside in the heart or the anahata chakra.

The knowing principle begins to perceive the interconnectedness of being. Compassion fuels consciousness in this chakra. Many saints live in the heart; it is a very elevated level for consciousness. When consciousness continues its ascent upward, it moves into the vishuddha chakra, the seat of expression of the higher wisdom, the wisdom of harmony and alignment with the Divine Self. All actions are motivated by good intention and a desire to embody peace and to express the highest potential of life.

From this place of eloquence, consciousness evolves to the abode of transcendental joy, the ajna chakra or third-eye center. In this, the clearest form of perception, duality is transcended and Oneness is perceived. From this perception of Oneness, consciousness ascends to the sahasrara or crown chakra. This is the thousand-petaled lotus. Here there is no longer perception of ultimate reality but the knowing and being of ultimate reality. All senses are merged into the very source from which all senses originate. When consciousness attains this state of perception there is no longer anything to perceive; there is only super-consciousness, which brings about mukti or liberation from all avidya (misidentification), resulting in samadhi (the goal of yoga), the highest joy: eternal ecstasy.

The following is an easy-reference chart for understanding the chakra system. Keep in mind that even though physical locations and organs may be cited, the chakras exist in the astral body. Chakras are affected most directly through sound current and vibration. Mantra is a potent yogic method for purifying the chakras and promoting the ascent of consciousness. Asanas, due to their ability to directly stimulate the endocrine glands, are another potent method used for chakra cleansing.

Commentary: Chakras and the Subtle Body

Prana, the life force, travels along pathways in the subtle body called nadis, which are energy channels/currents. To the trained eye they look like a shimmering, shifting, mass of light with foci of different colors. In total, there are 72,000 nadis in the subtle body; but there are three main ones. Pingala nadi moves to the right. Ida nadi moves to the left. Sushumna nadi moves from the base of the spine to the top of the head. The ida and pingala pathways wind around sushumna meeting at the six chakras. Only sushumna extends to the seventh chakra the crown. Chakras are energy centers which are arranged vertically along sushumna nadi. The chakras represent levels of consciousness. If you were to cut open the physical body, you would not see these shimmering masses of light nor these energy centers. This is the anatomy of the subtle body not the physical body, although physical reference points are given for the chakras and nadis.

Most of the time prana moves sporadically through the nadis. Through pranayama, controlled breathing practices, the yogi learns how to guide prana through the three main nadis. The yogi’s main challenge is to stabilize the flow of prana in the sushumna nadi. As long as the prana moves up and down ida and pingala, the yogi’s attention is externalized; and is thus dominated by lunar and solar forces. The word Ha-tha signifies the union of the sun and moon, that is, the convergence of the life force in sushumna nadi that ordinarily travels along ida and pingala.

By forcing the life energy, prana, along sushumna nadi the yogi stimulates the dormant kundalini energy. Kundalini-shakti, or Kundali, she who is coiled, is envisioned as a sleeping serpent curled three and a half times around the shiva linga in muladhara chakra. Through regulating the flow of prana along sushumna nadi the yogi stirs the sleeping princess into action. As the dormant kundalini awakens, she begins her journey through the levels of consciousness, the chakras purifying them as she travels upward.

Muladhara, the root center, located at the base of the spine is where her journey begins. Here the yogi dwells in earth consciousness, which concerns basic necessities: food, shelter, and clothing. How can the yogi expect to attain a peaceful enlightened state when worried about how to pay the rent? So once every thing is settled on the earth plane kundalini moves upward to swadhisthana, her favorite standing place, located three fingers below the navel. In the warm waters of swadhisthana the yogi’s consciousness is absorbed in sexual matters. Purification of swadhisthana does not mandate celibacy, simply sexual continence. Through sexual continence the energy is harnessed and used to bring the yogi closer to god. This allows kundalini to move to the next level of consciousness manipura, the jewel in the city, located at the solar plexus. Here the yogi must combat the glorious illusion of name, fame and power. When the yogi sincerely and successfully gives up the love of power for the power of love, kundalini gracefully travels into anahata, which is located at the heart. Here, compassionate nature and sweetness begin to infuse into the yogis consciousness.

Being grounded in compassion kudalini rises upward to vishuddha, the poison free place, located at the throat. Here speech becomes purified, the words issued forth from the yogi’s mouth are kind. They serve to uplift, inspire, and empower others, never degrading or placing judgment on them. At this point kundalini continues her journey towards ajna, the command place, located between the eyebrows/the third eye center. This center is associated with manas, the mind. Here the yogi’s thoughts become perfected. A perfect thought is one free of selfishness. As compassion and purity fill the mind, the third eye is opened and intuitive vision prevails.

Now kundalini begins her final ascension into sahasrara, the thousand-petaled lotus, located at the top of the head. This energy center represents universal consciousness. When kundalini floods the crown chakra the desired condition of blissful ecstasy, samadhi is attained. If we regard the life force, prana, to a cool breeze, kudalini is comparable to a hurricane. If a house does not have a sturdy foundation, the hurricane will blow it down. Likewise if the yogi does not have a sturdy foundation, grounded in great discipline, the premature arousal of kundalini could result in temporary insanity. The yogi’s foundation should be built upon pranayama (breath control), asana (posture/connection to the earth), bhakti (devotion to god), meditation, and scriptural study. Effort in ones spiritual practices coupled with devotion and pure intention, cultivates a sturdy foundation, a stage set for kundalini’s arousal. However despite all efforts, the yogi must be patient and have faith that the great Goddess kundalini knows best. She will in an act of grace awaken at the perfect moment. 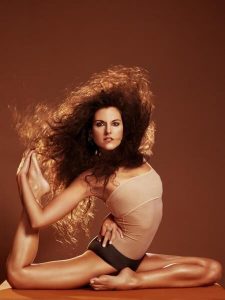 Commentary Teacher Bio: Uma Nanda Saraswati graduated from the Jivamukti Yoga Teacher Training Course in 1997. She has been a devoted practitioner and teacher of Yoga since 1994. She brings elements of art, dance, devotion and meaningful living into each Jivamukti Yoga Asana class. In a lifelong search for meaning and depth, Uma found herself at the feet of many Spiritual Masters. She has studied Sanskrit, puja (worship of the Divine), meditation, chanting, Bhakti and Karma Yoga. Her teaching of Yoga asanas is steeped with this intensive background of Yogic Studies. Her many years of association, touring and teaching with Bhagavan Das, Sharon Gannon and David Life have brought a high level of integrity and maturity to her graceful teaching style. You will find Uma’s classes challenging, informative, spontaneous, and worshipful.