Nadam: Listening for the Unstruck Sound

The Hatha Yoga Pradipika declares that samadhi is achieved when the anahata nadam, the unstruck sound, can be heard. The aim of Hatha Yoga is to hear this soundless sound, which is Om, the dissolution of all sound, and the music of the spheres. To do this the yogi must first perfect the ability to listen. The fruit of meditation practice is the ability to listen, to be receptive enough to perceive the subtlest sounds emanating from within each of us.

Sound is the essence of all energy. The first vibration, the Nadam, was “unstruck,” meaning that it occurred at a time when there were no things to strike against each other to make a sound. That first very subtle vibration is still resonating through each and every vibration that has arisen since the beginning.

Nada Yoga is the yoga of deep inner listening. Nada is a Sanskrit word meaning sound; the related word nadi means river or stream. It also means rushing or sounding. Nadis are the subtle channels through which consciousness flows.

To begin the practice of Nada Yoga, the yogi first practices pratyahara by drawing the senses inward and forcefully shuts out as many external sights and sounds as possible. The first stage of pratyahara is to become still and quiet, and allow an inner tranquility to permeate the senses.

Once you refine your external listening, you can turn your ability to listen inward. The nada yogi longs to pulse with the inner pulse of life itself. Yoga practices provide techniques for tuning the instrument, for rendering an ordinary body into an instrument for Divine will. Through the practices of Nada Yoga, the yogi’s mind becomes absorbed in the inner sound of Om.

All mantras emanate out of OM and resolve back to OM

There are two levels to the sacred sound Om: manifest and unmanifest. On the manifest level OM is the union of three sounds A – U – M. Each audible sound represents a particular aspect of the phenomenal universe. The first sound in OM is ‘A’. ‘A’ is produced in the back of the throat at the first mouth position. Being first it represents the great initial vibration or creative principle of the universe. In the Hindu trinity ‘A’ represents the God Brahma (the creator God, who brings about manifestation). The second sound in OM is ‘U.’ ‘U’ is produced at the lips known as the fifth mouth position. ‘U’ represents the principle of growth and preservation. Lord Vishnu (the preserver God) is represented in the letter U. The last audible sound ‘M’ is produced by closing the lips and vibrating the sound upwards. ‘M’ sound is represented by the Hindu deity Lord Shiva, who stands as the completion aspect of the manifested universe. All three sounds rise and fall together. What has a beginning, has a middle and must have an end, then the cycle continues again. There is nothing in this manifest world which is not under the law of OM. A plant was first a seed, with only the force of A the seed sprouts, that seedling continues its process and grows (U), eventually it finishes its cycle of manifestation (M).

In Sanskrit there exist a series of sound harmonic laws known as Sandhi. According to sandhi laws, when two vowels come in direct contact with each other they must undergo a blending process which causes each sound to lose its respective individuality for the sake of the union of the two. In this way, when ‘A’ comes in contact with the vowel ‘U’ their meeting produces the sound ‘O.’ Guruji used to ask students to feel the top of their heads and produce a sustained ‘M’ sound. “Feel the vibration that this produces at the crown cakra. Feel how it awakens your consciousness”, he would say. When you add the ‘M’ sound to any vowel as we do with OM, the addition of the ‘M’ transforms the ‘O’ into a bija (seed) mantra because with the M sound the vibration gets directed toward the crown, awakening the seat of consciousness. Throughout our life our bodies are passing through the three phases contained in OM: beginning, middle and end. Even our mind and thoughts are under the cyclic law of the OM.

Peace and tranquility will only be experienced when we feel who we are beyond the body and the fluctuating mind. In other words, when we meditate beyond the cyclic rising and falling of manifest OM, then we begin to contact our true nature. Our real nature is silence. The sound of inner silence is called nadam (inner music). It is known as the unmanifest fourth aspect of OM or Turiya. Nadam is the great cosmic vibration that exists all the time chanting us in the form of vibration. Try chanting mantras and then remain still and you will hear a silent echo pulsating inside and outside the body. When we meditate and contact inner nadam our minds become quiet and our real nature shines forth.

One day a week for a month wake up with the sunrise. After bathing sit quietly and chant the following mantra for 2 minutes continuously.

OM Namah Shivaya
Salutations to Lord Shiva, who represents the auspicious tranquil center that exists within me.

After chanting sit for 10 minutes and watch your thought waves. Do not follow the thoughts just watch them as a witness. Listen to the inner humming, inner nadam, inner OM. Let the cosmic silent OM chant you. Feel the silent space between the thoughts. Afterwards note in a journal the soothing and quieting effect this practice has on you 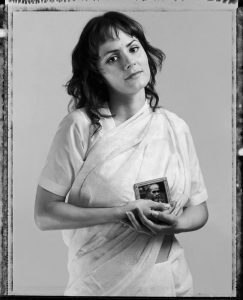 Commentary Teacher: Manorama
The director of the School of Sanskrit Studies in NYC, leads workshops on Luminous Shabda, a path which combines Sanskrit, Mantra Meditation and Yoga philosophy. She teaches in NY at Ananda Ashram, Jivamukti Yoga, Omega Institute, Integral Yoga, Kripalu Yoga and Laughing Lotus Yoga. She leads workshops nationally, as well as internationally in Europe and Canada.

Manorama’s mix of earthy charm, deep scholarship and humorous teaching style were born from years of close study with her Guru, Shri Brahmananda Sarasvati, founder of Ananda Ashram and author of The Textbook of Yoga Psychology. Manorama shares her knowledge of Sanskrit and Luminous Shabda basing this work on the tradition that Shri Brahmananda taught her. She is a graduate of Columbia University.

In 2003, Manorama produced her first traditional Sanskrit Chanting CD, the acclaimed Sarva-Bhuteshu ‘In All Beings’, followed by Maha-Mrtyunjaya-Mantra in 2004 and her latest release Learn To Chant Yoga Invocations in 2005.

For more information on Sanskrit Studies or Manorama visit www.sanskritstudies.org