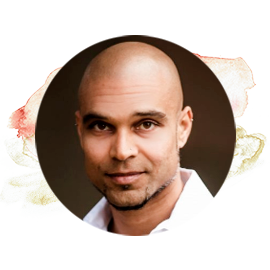 Hawah Kasat is an artist, author, educator, community organizer, and yogi. He is co-founder and executive director of One Common Unity (OCU), a non-profit that supports a movement for peace education and the building of a non-violent culture through music and art. Currently, OCU runs dynamic programming in 24 schools throughout Washington, DC and serves over 3,500 youth and families a year. Under Hawah’s leadership, OCU received the prestigious Mayor’s Arts Award for Excellence in the Humanities. In 2018, OCU was awarded the National SHIFT Award for their pioneering work in integrating the healing arts with environmental stewardship. In 2019, Hawah was honored to receive Georgetown University’s “Legacy Of A Dream” Award at the Kennedy Center. The university presents the award annually to an inspirational emerging leader whose work embodies the values and spirit of Dr. Martin Luther King Jr.

In the years prior, Hawah worked as an Americorps community organizer and mentor in D.C.’s most under-resourced neighborhood. After graduating from American University, he was awarded a fellowship with the Robert F. Kennedy Memorial Foundation to work as a special representative to the United Nations and the World Conference Against Racism. For 4 years, he also directed the Peaceable Schools Program in D.C.’s largest public high school—and today, continues to lead training for teachers and students in conflict transformation, trauma-informed care, positive youth development, anti-racism, mindfulness, social-emotional literacy, and arts empowerment. Over the years, Hawah has authored 4 books, produced 3 documentary films, and released 2 music albums. He is the creator/ editor of “The Poetry of Yoga” book anthology (published by White Cloud Press) that features Grammy award-winning musicians and master yoga teachers. His latest collaborative documentary film project, “Fly By Light,” has received wide acclaim and awards, while touring international film festivals.

Hawah, is a certified Yoga Instructor, who was trained and certified in Sivananda Yoga at the Yoga Vidya Gurukul, a world-renowned teacher training college in India.  He holds a second certification in the Jivamukti Yoga School and also holds an advanced certificate from The Center for Mind Body Medicine in trauma relief and healing.  He maintains a Vipassana Meditation practice and practices Kung Fu (specifically training in Shaolin, Baguazhang and Tai-chi styles). He has worked with all types of students from diverse demographics, teaching yoga at the Washington Post, law firms, award-winning yoga studios, and youth recreation centers and prisons.