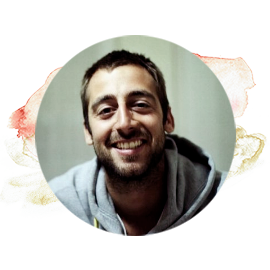 Javi has a regular meditation practice since he was 23 years old, including retreats with periods of silence or solitude in the mountains lasting between one week and three months. Currently, he is in the process of ordination in the Triratna Buddhist Order, where he directs a group of Buddhist teachings and meditation for young people in the Barcelona center. In 2018, after some realizations, he decided he needed to move his energy through yoga. He had practiced yoga before, but he started taking it more seriously. He understood that if he wanted to deepen in his yoga practice, he should go to a teacher training. And there he went to India. He now has a regular yoga asana practice and keeps learning every week. Recently, he has started teaching some yoga classes in Barcelona.