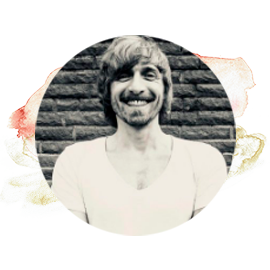 Martin was already interested in Indian religion philosophy when he was a teenager. The time he used to learn more about the physical aspect of yoga, he was impressed by the relaxing effect of physical exercise on his mind. Since then yoga captured his heart. Martin appreciates how Sharon Gannon and David Life combine a commitment for the protection of the environment and animal rights. Martin also likes the reference to God in Jivamukti Yoga such as the connection of classical yoga philosophy and modern lifestyle. When he got to know that the 75-hour teacher training with Antje Schäfer and Michi Kern would take place in Germany, he decided directly to participate. However, when he was travelling seven hours to Munich, he already started to doubt his decision. Why should he make such an effort? But the first day of his teacher training, he knew Jivamukti Yoga finally led him to where he belongs. Martin has made the experience that yoga contributes to accept one’s own life in every aspect. In his understanding yoga helps to understand the consequences of our actions and to become mature as an adult. Martin appreciates a physically demanding style of Vinyasa Yoga, he likes to be aware of limits and to shift them. You are going to know that when you visit his yoga classes. However, for him yoga is far more than just the practice of asanas – you are also going to notice that when you join his classes!