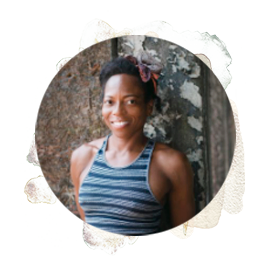 Rowena has been practicing yoga asana since 2008. The physical practice soon gave way to a deeper awareness of body, mind and spirit. She became curious about the history, philosophy, and physiology of this practice and decided to explore this curiosity through various workshops, retreats, and eventually the completion of her first 200hr training in India in 2016. She went on to study with Sharath Jois at KPJAYI in Mysore, has taught in the UK, Central and South America, Germany, and as a lead teacher on trainings in India. Once it became clear that she wanted to dedicate her energy towards teaching and that she wanted to share it in the way it was revealed to her, she turned to the method that introduced her to the alchemy of yoga: Jivamutki. She completed her 300hr training in Costa Rica in 2017, guided by David Life, Anja Kuehnel & Rima Rani Rabbath. She completed 800hr certification under the meticulous mentorship of Anja Kuehnel and now teaches at Jivamukti Yoga School in Berlin. Whilst based in Berlin, Rowena continues to teach internationally on trainings, workshops and retreats. She believes in the importance of being a student first and foremost, and dedicates time each year to learn directly from her teachers. Rowena extends her deepest gratitude to all of the teachers who guided her path towards this spiritual journey. With special thanks to Sharon Gannon, David Life, Anja Kuehnel & Netta Imber. She teaches to pay this forward.