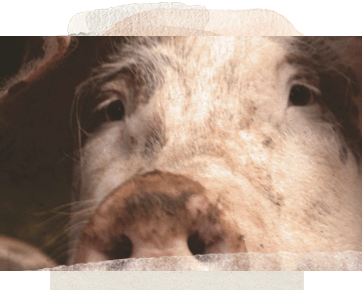 Sharon answers questions on the livestock industry and the history of enslaving, torturing, exploiting, and massacring defenseless creatures.

Q: Are animals a lower life form than humans?

SHARON: It has been an obsession of human beings to create a hierarchy that places the human species on top and lumps all the “other animals” together beneath us. The resulting “speciesism” allows us to look upon animals as less deserving of all manner of rights and considerations than humans. To support this lower status, humans have argued that animals act instinctually; don’t have souls; don’t feel physical pain like we do; and lack self-consciousness, cognitive intelligence, emotional feelings, morality, and ethics. In fact, numerous scientific laboratory tests and field observations have led to the conclusion that animals are conscious, intelligent, emotional beings. They are not machines and truly feel physical pain when it is inflicted upon them. They are capable of experiencing a wide range of emotions, including loneliness, embarrassment, sadness, longing, depression, anxiety, panic, and fear, as well as joy, relief, surprise, happiness, contentment, and peace. At times some may exhibit behavior that shows a highly developed sense of morality and ethics. They may not speak human languages, although some primates have been taught American Sign Language (ASL); they nonetheless have highly developed communication skills and vocal languages of their own that no human being has yet mastered, except maybe Dr. Doolittle.

Q: What would farm animals do if we stop eating them and let them go free? Where will they go? They’ve been domesticated for thousands of years; they don’t know how to live on their own. Wouldn’t it be a form of cruelty not to take care of them?

SHARON: This is the same argument that white American slave owners gave in the 1800s when they tried to defend their right to own slaves. Yes, we have robbed these animals of their wildness, and they might not be able to revert to a feral state if all the doors of all the factory farms were opened. We have severely altered these animals biologically and emotionally, depriving them of any opportunity to develop skills with which to live with one another and their environment. This process of degradation has been going on for thousands of generations. The first step is to stop abusing these beings: stop breeding them through cruel, artificial means. It may be unrealistic to let them all go free right now, but it is realistic to acknowledge that, as a species, we human beings are quite ingenious. If we give serious consideration to this problem, we will no doubt find solutions and eventually free these animals. When we do, we will free ourselves.

Q: No one was so up in arms about meat eating until recently, with the rise of industrialized farming and the cruel practices common in today’s factory farms. Couldn’t we go back to a simpler way of raising animals for food and support only small family-owned farms where animals are treated humanely?

SHARON: Farms, whether small or large, are places where slaves are kept. The animals are fattened up to be eaten, or exploited for their ability to make honey or milk, or for their fur, wool or body parts; they are kept as breeders to produce more animals who can in turn be exploited and ultimately sold, slaughtered, and eaten. Some people may argue that if the animals are treated humanely prior to being slaughtered, this justifies their confinement and slaughter. Is it ethical to rob beings of their freedom but give them a comfortable prison and provide them with food until they become fat enough to be slaughtered? Any way you look at it, farms are places where animals are kept in preparation to be slaughtered and ultimately eaten as food. The question might be put this way: Is it really that much better to make friends with animals before you kill them than to treat them as nameless, faceless objects before you kill them? From a yogic point of view, one must weigh the karmic consequences of perceiving others as mere objects to be used and the consequences of profiting from the suffering of others.

Q: Is there a difference between animal rights and animal welfare?

SHARON: Yes. Animal rights activists believe that animals exist for their own reasons, not to be used by human beings. Some animal rights activists take an abolitionist stance and feel that we have no moral right to exploit animals for any reason. Activist Ingrid Newkirk sums it up like this: Animals are not ours to eat, wear, experiment on, use for entertainment or for any exploitative purpose. Animal welfarists, on the other hand, do not believe that the lives of animals are important for their own sake. They believe that if we take care of animals and see to their welfare by providing them with a quality of life that gives them the appearance of happiness and health, it is okay to exploit them for our own purposes. Welfarists are concerned with the quality of the animals’ lives before or even during their slaughter and want animals to be treated, and slaughtered, “humanely.” Welfarists don’t necessarily feel that it is wrong for humans to use animals for our own purposes.

Q: Why have human beings treated animals so poorly for so many years—enslaving, torturing, exploiting, and massacring them?

SHARON: That is the big question each of us must answer for the animals and ourselves. Perhaps we have treated them so poorly because we have the means to do so and can get away with it. Perhaps in a perverted attempt to feel powerful ourselves we exert power over others who are defenseless against our weapons of mass destruction (poisons, bombs, guns, spears, knives, forks, etc.). Perhaps, because of our unenlightenment, we do not know that what we do to others we ultimately do to ourselves. Perhaps because of our ignorance of who we really are, we strive for a sense of identity through dominating others. Perhaps we are so unconscious about our actions that we don’t even realize the immense suffering we are causing to animals, the planet, and ourselves. Perhaps we have become so addicted to our greed-driven habits that we have lost our moral compass and don’t know what is right and wrong. Perhaps we have just gone along with the crowd and haven’t questioned our assumptions or our behavior in regard to our fellow earthlings. Perhaps common sense is not so common.