New to Jivamukti Yoga? Find some answers to frequently asked questions on this page. If you can’t find what you’re looking for, please feel free to contact us.

What is Jivamukti Yoga? 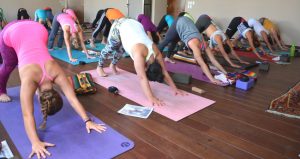 As a path to enlightenment through compassion for all beings, Jivamukti Yoga is grounded in the original meaning of the Sanskrit word asana as “seat, connection” – relationship to the Earth. Earth implies all of life.

Citing Patanjali’s Yoga Sutra, which states that asana should be sthira and sukham, Jivamukti Yoga maintains that one’s relationship to others (asana) should be mutually beneficial and come from a consistent (sthira) place of joy and happiness (sukham). This is a radical idea that, when put into practice, can dismantle our present culture, which is based on the notion that the Earth and all other animals exist for our benefit and to be exploited for our own selfish purposes.

So the practice of asana becomes more than mere physical exercise to keep one’s body fit or to increase strength or flexibility; it becomes a way to improve one’s relationship to all others and thus lead to enlightenment – the dissolution of the sense of separateness, the realization of the oneness of being, the discovery of lasting happiness.

This core philosophy is expressed through five tenets which form the foundation of Jivamukti Yoga. Jivamukti teachers embody these tenets, so that they color all of his or her teachings, whether in Basic classes, Open classes, other classes, workshops, or even just interactions with others in the Jivamukti community.

Each of the five tenets should be clearly identifiable in every Open class, even though the names of the tenets may not actually be spoken. By doing this, students learn not to see asana as separate from spiritual study or chanting or meditation, but rather to integrate all of the elements that make up Jivamukti Yoga into one unified practice. This provides for a well-rounded approach to our goal—enlightenment through compassion for all beings.

What is an Open Class?

So the practice of asana becomes more than mere physical exercise to keep one’s body fit or to increase strength or flexibility; it becomes a way to improve one’s relationship to all others and thus lead to enlightenment – the dissolution of the sense of separateness, the realization of the oneness of being, the discovery of lasting happiness. This core philosophy is expressed through five tenets which form the foundation of Jivamukti Yoga. Jivamukti teachers embody these tenets, so that they color all of his or her teachings, whether in Basic classes, Open classes, other classes, workshops, or even just interactions with others in the Jivamukti community.

How do I decide which class is right for me?

If you are looking for a well-balanced and transformative class where you can work at your own pace, then a Jivamukti Open class is for you. The teacher offers a creatively sequenced class with detailed alignment instructions and yoga philosophy weaved together. Options will be provided for beginner, intermediate and advanced levels, although some yoga experience is recommended.

For those who are busy and looking for a “get-in-shape” class or are comfortable with more minimal instruction, then Spiritual Warrior Class is the perfect choice. Spiritual Warrior is a fully balanced 1-hour set sequence that is the same every time, so students will pick it up quite quickly after only a couple classes.

Beginners will feel comfortable attending any week of Jivamukti Fundamentals Classes. During a Fundamentals Class, the teacher will provide more detailed instruction on “how to do” the postures, emphasizing alignment of the body and the use of props such blocks, belts and blankets. More experienced practitioners looking to deepener their practice are also welcome to attend, as all students are encouraged to ask questions throughout the class.

Can I take any week of the Fundamentals Course?

Yes, it is perfectly fine to begin taking Jivamukti Fundamentals Classes at any point during the month. Each Fundamentals class is designed as a stand-alone course. It is preferred that compete beginners take a class from each of the four weeks.

What should I wear to class?

We suggest wearing comfortable clothing which allows you to move freely: gym shorts, sweatpants, spandex, t-shirts, and tank tops. Shoes are not allowed in the classroom. We ask that both males and female wear a top during class. If you happen to forget a change of clothes, be sure to check out boutique which carries a wide selection of practice clothes for both men and women.

Do you have a yoga mat I can use?

Yes, we have high-quality Jade and Manduka yoga mats for rent for $2. Class Pass/FitReserve/Yoga Pass Book mat rental is $3. We encourage you to bring your own mat (BYOM) and help us conserve water & electricity.

*The mats are professionally laundered after each use.

Do you have a towel I can use?

Where can I store my belongings?

We have hangers, shelving and personal lockers available for use in the hallways. You may also bring personal items and valuables into the classroom with you.

What If I need to leave class early?

If you need to leave early, please let your teacher know. We ask that you please leave before Shavasana, the final relaxation, or meditation begins, so the others students won’t be disturbed.

Are the classes heated?

Jivamukti classes are not considered to be “hot yoga.” But our classes can be quite vigorous so expect to sweat! Internal heat generated by the body is more detoxifying and cleansing than any external heat caused by heating the room to a higher temperature. From time to time, teachers may use additional space heaters at their discretion.

I've never practiced yoga before. Is Jivamukti Yoga right for me?

Jivamukti Yoga is a smart choice for beginners. Our teachers are some of the best in the world and go through a rigorous training program considered to be the “gold standard” in yoga. You will be confident that you are developing good habits as you begin to move the body in new ways. Jivamukti Yoga is connected to a long, rich lineage so you will be learning the ancient teaching of yoga that have been adapted for modern times

What if I am recovering from an injury or surgery?

Many practitioners find yoga to be vital in the healing process. However, we recommend that you consult with your physician first. Please inform your teacher about any injuries you would like them to be aware of.

Is Spiritual Warrior Class easier than the Open Class?

Spiritual Warrior is shorter in length, but covers many of the same points found in a Jivamukti Open class. In Spiritual Warrior Class, the teacher keeps the class moving quickly and provides minimal instruction so some experience with yoga is preferred.

Will practicing Jivamukti Yoga conflict with my religious beliefs?

Absolutely not. Members of the Jivamukti community belong to a wide variety of religions. We believe that yoga is for everyone and our school is committed to being a space that is tolerant and free from discrimination of all forms.