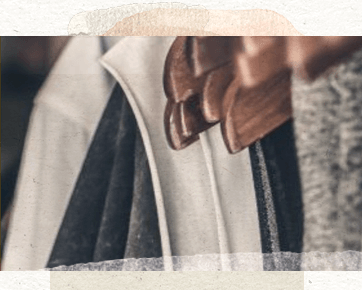 Sharon answers questions on why we should look for recycled and sustainable fashion.

Q: How is wearing recycled / reworked clothing connected to yogic principles such as ahimsa and greedlessness, and being happy with what we already have…

Sharon: Simple, we are huge consumers, we are consuming so much that we are trashing our planet as well as ourselves. I heard on the radio the other day that in America 90% of everything which is bought at a Mall ends up in a landfill within 10 days! Shopping is an addiction. At the base of it is a deep feeling of worthlessness and low self-esteem. Yoga teaches us that what we do matters. As individuals we create the whole. Through yoga practices we are provided with many opportunities to look deeply into ourselves, into what motivates us in our relationships with others as well as with the earth, which is our greater body.

I think that Ahimsa (non-harming) and Aparigraha (greedlessness) are connected, that is why they are listed as the first and the last of the yamas. Together they form a continuous circle of compassion. When you really get into the practice of ahimsa you find that naturally let go of the grasping for stuff to make you happy. When you practice aparigraha you find your sense of self, expanding to include others, creating a wider community.  One cannot be kind to others and at the same time selfish and greedy it is an oxymoron

Q: What you have observed about the wastefulness in the world particularly as it applies to the fashion world, fabric, and people getting rid of clothing by dumping it in the trash… what can be done to combat this wastefulness

Sharon: Well when you throw something away, where is it really going, where is this place we call “away”? It doesn’t exist. So if we care about this earth, if we care about ourselves than we have to stop buying so much stuff.  Don’t buy anything unless you really feel that you absolutely have to, that you would die or freeze to death or something if you didn’t. So when you have made that descion then narrow down your options: Try to find it in a thrift store.  Or look in your closet and refashion something old into something new. Or support the up and coming designers who are making stuff out of recycled used clothing, like Foat design, those women, Zoe and Katja Foat, are real heroines of mine, they are creating more than a fashion statement they are pioneering a movement!

I am excited to be part of a movement to dismantle our present disposable culture. I feel that yoga provides us with the skills to do that in a joyful way.

Q: What kinds of yoga clothing and products do you make available at your yoga center and why…

Sharon: We don’t carry anything made out of silk, fur, leather or wool, except if the wool item has been made from a recycled sweater.

We carry organic clothing made from hemp, bamboo and cotton. Why organic cotton we are often asked? Well for a few reasons. “normal” Cotton is one of the big four along with Canola, Corn and Soy crops, which are genetically modified.  Also through the normal raising of cotton much herbicides and pesticides are used which harm and kill wildlife as well as poison the soil and the water. So to put it simply cotton is very bad for the environment in so many ways. Organic cotton is much better for the environment and the animals.

I am interested in promoting ways to walk more lightly and peacefully on this earth. Having less things is a yogic practice (aparigraha). It is good when you know that the few things that you do have in your closet did not contribute to the exploitation and suffering of other beings or the destruction of the earth. But just because the fabric is ‘organic’ doesn’t necessarily mean that it was derived in a compassionate way. The geese or sheep may have been fed certified organic food but this doesn’t negate the fact that they are being kept as slaves and their feathers or wool have been plucked or cut from their own body not for their sake but to benefit and profit monetary profit for humans. Leather or fur may be organic, but organic doesn’t necessarily mean kind. I’m interested in discovering ways to be more kind.

Q: Do you have any anecdotes from your own life about wearing a re-fashioned article of clothing and how it affected you?

Sharon: I have never been a big shopper, growing up poor didn’t afford me with that so-called luxury, so I got used to wearing my clothes until they were ragged and clothes found in thrift stores. When the punk movement hit I was right in style.

In the early 1980’s I participated in several fashion shows in various East Village venues where I lived. I formed a small “designer group” with another friend of mine. We were trying to make a political statement about the ruthless consumerism perpetuated by the fashion industry. Being someone who loves to explore words and their real or original meanings I discovered that the word ‘fashion’ means to make as in “to fashion something.” So our radical mission statement became: Fashion Means to Make not to Buy! We fashioned clothes out of stuff we found in trash piles or bought cheaply from thrift stores. On the streets of NY it is very easy to find discarded clothes in front of apartment buildings, which have been thrown out because they are now considered out of style or past season or because the resident moved or was evicted. There is never a shortage of raw materials for fashioning clothing in New York City.

Around that time when I started to get noticed in the press for being a yoga teacher, many reporters commented on my clothing style and wanted to know where I bought my clothes. When I replied, I don’t buy clothes, these are just some old things I found!