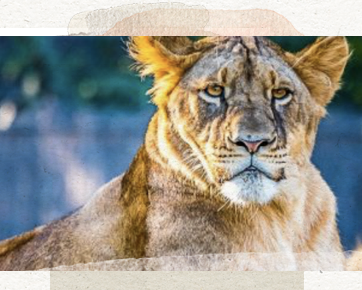 Isn’t it natural to eat meat? Human beings have always eaten meat; even animals eat other animals. Shouldn’t we try to live a more natural life?

SHARON: Some meat eaters defend meat-eating by pointing out that it is natural: in the wild, animals eat one another. The animals that end up on our breakfast, lunch, and dinner plates, however, aren’t those who normally eat other animals. The animals we exploit for food are not the lions and tigers and bears of the world. For the most part, we eat the gentle vegan animals. However, on today’s farms, we actually force them to become meat-eaters by making them eat feed containing the rendered remains of other animals, which they would never eat in the wild.

Lions and other carnivorous animals do eat meat, but that doesn’t mean we should. They would die if they didn’t eat meat. Human beings, in contrast, choose to eat meat; it isn’t a physiological necessity. In fact, we are designed anatomically to be vegetarians. Besides, lions and other carnivorous animals do a lot of things besides eat meat. They live outdoors, not in houses; they don’t wear clothes or drive around in cars; they usually sleep for many hours after eating a meal. Why cite just one of the many things that they do and argue that we should imitate them? This doesn’t make much sense.

Besides, there are many activities that human beings have been doing “forever.” We might argue from that perspective that eating meat should be allowed to continue. Men have been raping women for thousands of years; does that mean that it is normal and should be allowed to continue? Human beings have been waging war and destroying the environment for a long time. Just because it has been going on for a long time and become an unquestioned habit, does that mean it should be allowed to continue. Rape, war, slaughtering and exploiting other animals is not something hard-wired in us—these are learned behaviors, and that means they can be unlearned—and that’s good news! So let’s pick up our forks and/or chopsticks and let the peaceful revolution begin….

Q: Aren’t humans biologically designed to be meat eaters or at least omnivores?

SHARON: The anatomical and physiological facts suggest no. We have small, flat mouths with small teeth. We don’t have long, sharp canines to tear flesh. We have incisors in the front to bite and molars along the sides to chew and grind fruits and vegs. Our teeth aren’t strong enough to chew and crush hard things like raw bones, whereas carnivores can. We have a rotating jaw that moves from side to side, another useful feature for grinding plants. Carnivores and omnivores have hinge-joint jaws that open and close. They don’t normally chew their food well before swallowing, and they don’t need to. Unlike us, they don’t have an abundance of the enzyme ptyalin in their saliva, which breaks down complex carbohydrates found only in plant foods. Once we have chewed and swallowed our food, it travels through a very long digestive tract, although not as long as that of our herbivore friends—the cows, horses, and sheep. Meat-eating species have comparatively short intestinal tracts, which allow them to move food through their systems quickly, so as not to allow rotting flesh to stagnate and cause disease.

Because we lack sharp claws, aren’t very fast on our feet, and aren’t exactly endowed with lightning reflexes, it would be very difficult if not impossible for us to run down an animal, catch it with our bare hands, and tear through its fur and skin in order to eat it. Biologically, we are designed to be frugivorous herbivores eating mainly fruits, seeds, roots, and leaves.

Humans do not need to eat the flesh of other animals to exist, whereas some animals are carnivores and cannot survive by eating only vegs. Humans, on the other hand, eat meat only out of choice. We have been conditioned, taught, and coerced by the agents of our culture (parents, grandparents, advertisers, food critic, etc.) to eat the flesh and drink the milk of other animals. Because of this conditioning, which has occurred over a long period of time (thousands of years), we have developed addictive eating habits and blinded ourselves to the facts of our biological system and its true needs.

Many gruesome studies have been done in which cholesterol-rich food was force-fed to dogs and cats in scientific research labs and the results have always proven the same: no matter how much highly saturated animal fat was fed to dogs and cats, it did not affect their arteries—there was no cholesterol built up in their arteries, and the researchers were unable to induce heart disease in them through feeding them a high protein/high-fat animal flesh diet. This proves that animals like cats and dogs are true omnivores and can eat a wide variety of foods from both animal and veg sources. On the other hand, the number of human deaths due to hardening of the arteries and other similar diseases suggests that human beings were not meant to eat animals; our bodies are unable to digest the animal fat effectively and it ends up stored in our blood vessels, not to mention our waist lines, buttocks and thighs!

Often people will argue about veganism and bring up Eskimos, saying, “well what about Eskimos? They have to eat meat to survive—they can’t plant veg gardens on icebergs.” This is true: Arctic-dwelling Eskimos have no choice but to eat large amounts of meat and animal fat. But let’s get our facts straight: according to the American Journal of Clinical Nutrition, Eskimos also have the highest incidences of heart disease and osteoporosis in the world and, in general, short life spans. Perhaps that is something to consider when we are faced with the choice of what to eat for dinner and unlike Eskimos most of us do have choices.

In fact, we would know ourselves that we are not meant to be meat-eaters, and we would not have allowed ourselves to become conditioned to meat-eating in the first place, if the effects of meat-eating were felt right away. But since heart disease, cancer, diabetes, osteoporosis, etc. usually take many years to develop, we are able to separate them from their cause (or contributing factors) and go on happily eating an animal-based diet. We then become conditioned to see these diseases as occurring normally as we age or as we gain weight or if we eat a “bad diet” (e.g., a diet with too much animal products), and we resign ourselves to them and to the expensive and side-effect-laden pharmaceutical drug regimens we have devised to deal with them, which all involve horrendous, sadistic torture to animals in laboratories. We enslave, torture and then slaughter animals to eat them, then when we eventually become sick from that we enslave, torture and kill more animals in laboratories in the hopes of creating drugs to enable us to continue with our animal-abusive lifestyle! Few of us look to the future (i.e., to our parents and grandparents), see the effects of an omnivorous lifestyle, and opt-out of it before it makes us sick.