“You are the Bread Making Machine” with Karo Tak 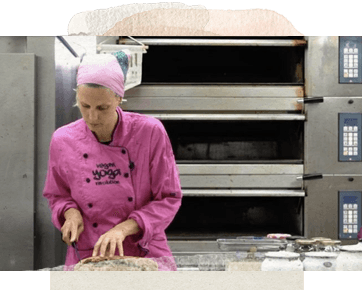 So let’s make the yeast first:

In a medium bowl activate the yeast by putting in the yeast, 1 cup of warm water and the sugar, cover with a tea towel and let it set for 10 to 15 minutes.

While you let the yeast set start getting the bread ready:

In a large bowl put the flour, salt and oil, wait until the yeast is ready to go, when it is ready add the yeast to the large bowl, add the rest of the water and knead for about 20 minutes, if the dough feels too dry, add water, if it feels too wet, add flour, the more you knead, the nicer the bread, when your fingers are no longer sticky and you have created a nice, soft, nearly fluffy dough, form the dough into a big ball.

Put some oil in a large bowl, put the ball of dough in the bowl, coat with the oil, both sides, I call this giving the dough a nice bath, massaging the oil into the dough, then cover the bowl with a tea towel (the bowl needs to be completely covered) and leave to rise for 2 hours, after 2 hours you come back to the dough, flatten it and separate the dough into two rolls of bread, you roll it up so it has a bread shape with both ends tugged in, place into oiled bread tins, bake for 45 minutes in a pre-heated oven at 180 degrees.

Now this seems like a really long process but really the rising takes the longest, with the same recipe I also make fresh bread buns, what you do then is the exact same process but instead of putting the bread in baking tins to rise, I divide the bread in 10-12 balls I put them on a baking tray covered with a tea towel and let them rise for 30 minutes before putting them into the oven to bake for 30 minutes. Also with the same recipe you can make pesto, olive, tomato, garlic bread, whatever you can think of, what you do then is after the dough has done it’s rising thing, divide the dough into balls which you roll out with a rolling pin, add your paste of choice onto it, roll it up into a bread shape & put into the oven, really nice to serve with pasta and salads.