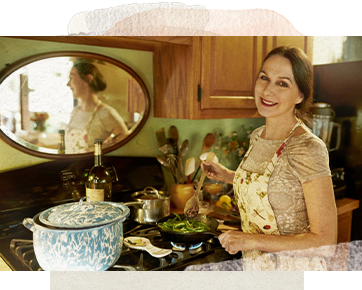 If you seek enlightenment, find a teacher, prostrate before them, question them, serve them, listen to them,

and be open to their knowledge.—Bhagavad Gita 4.34

You can teach a person all you know, but only experience will convince them that what you say is true.—Richelle E. Goodrich

My first real spiritual teacher was an alchemist named Randy Hall. By “real spiritual teacher,” I mean that he consciously gave me teachings and practices to help me understand the spiritual principles underling all of existence. By “alchemist,” I mean he practiced the ancient art of alchemy, of transforming the ordinary into the extraordinary. My teacher was a photographer by profession, and his knowledge of chemistry was not only practical but metaphysical as well. I initially came to him because I wanted to know the cause of physical matter. I asked him, “What makes form, form?” We started with chemistry.

Under his tutelage I studied the basic building blocks that constitute matter—the twelve cell salts. These salts, being crystalline in form, provide a mathematical or geometrical grid that attracts subtle vibrations and organizes them into what eventually becomes manifest form. I also learned how to grow crystals in test tubes in a laboratory setting and assisted him in classical long-term alchemical projects that dealt with elemental properties of minerals, especially mercury and gold. He taught me the value of meditation and how to look deeply into ordinary things to discover their essence, which included the investigation of words and their etymological meanings. He infused our lessons with practical science, providing what he promised was an experiential connection to truth

During this time, because of his guidance, I was drawn to the Theosophical Library, an occult library in Seattle, Washington, where I spent many hours reading books about yoga, saints, Eastern religions, and enlightenment. Several books stand out in my memory—all biographies: The Autobiography of a Yogi, by Paramahansa Yogananda, and two books by W. Y. Evans-Wentz, Tibet’s Great Yogi Milarepa and The Tibetan Book of the Great Liberation, a biography of Padmasambhava. After I read these, I professed to my teacher that above all else I wanted to become enlightened and asked if he could help me. He raised his already very arched eyebrows and slowly, with a kind smile, said: “First you must master three things, which by the way, are basic to alchemy: 1) Cooking—you have to learn how to become a good cook; 2) Cleaning—you have to learn how to keep the place you live clean and organized; and 3) Gardening—you must learn how to grow, nurture, and care for plants.”

I was incredulous at his response. It disappointed me, and I couldn’t embrace his advice seriously as it didn’t seem “spiritual enough” for me. Cooking? I was an impatient, skinny girl who disdained eating and was trying to reduce my food intake to a minimum and eventually live on air. How did he think I could get into cooking, what possibly could be the point? Cleaning? Oh, come on, that’s for housewives—I was a liberated woman! Gardening? How old-fashioned—in the modern world we all live in cities; farmers grow crops, and landscapers deal with flowers and such. I thought I was too intellectual and spiritual for those types of pursuits. Besides, I didn’t want to waste my life in such ordinary activities; I wanted God-/Self-realization right then.

My teacher was patient. He taught by example and was often in the kitchen mindfully preparing a vegetarian meal, focusing on each moment of preparation—scrubbing carrots, slicing cucumbers, or measuring out rice as if he were in deep meditation. There would be no small talk in the kitchen—all his focus was on the meal preparation. It was, after all, an alchemical experiment, and he didn’t want to miss one moment.

His living space was immaculate, sparse, Zenlike, with every item carefully placed and cared for. His clothes were always folded, and he didn’t keep extra clothes he never wore. He had a minimum of possessions—“More time to meditate!” he would say. His altar was simple but beautiful. He would always remind me how important it was not to allow clutter or dust to settle on one’s altar, as it was the mirror for one’s mind. On most of his windowsills, there were vibrant potted plants, and in the summer, he grew organic tomatoes, cucumbers, and herbs in window boxes.

Observing him, I came to understand how work could be transformed into worship. He knew how to see the extraordinary in the ordinary, and he tried to teach me how to do it too. He would say encouragingly: “Whatever it is you are doing, do it wholeheartedly, be completely involved. Don’t stop doing your spiritual work to take a break to do your other work; do you really have time for other work?” I came to realize that he saw everything he did as part of his spiritual work. I remember watching how he washed dishes, handling each dish as if he were bathing a newborn baby. When he scrubbed the floor, he would get down on his hands and knees with a cloth to wash it by hand. I still find that this is the best way to clean floors. He would comment that it enabled him to be fully present in the task and that it then became a ritual that resulted in not just a cleansing of the dirt from the floor but also a purification of the subtle atmosphere of the room.

I’m sure he was reciting prayers or mantras to himself as he scrubbed; for him, housework was a spiritual practice—a form of purification. When he was cleaning, sweeping, or scrubbing floors he was concentrated on what he was doing. He was careful not to distract himself by chatting or listening to the radio or music through headphones. And he also never did anything that he didn’t want to do; for instance, he never took a job just for the money. “How could I spend time in something I didn’t enjoy? This is my life!” he would say. He often had to take dishwashing jobs in restaurants to earn money, but he never perceived the job as mundane; he was somehow able to elevate it in his own mind. He was certainly the most dignified dishwasher I had ever seen!

It took me many years to realize the wisdom of my teacher’s advice, but I have come to see it as essential to a spiritually fulfilling life. These three steps have universal application to your relationship with the basics of your life: what and how you eat, where and how you live, and who the other living beings around you are. Are you relating in a way that enhances the lives of others and your own life, or not? Are you getting so far out and overextended that you are forgetting to go far in and pay attention to what is happening in front of you?

Spiritual aspirants often become so focused on what they perceive as their spiritual practice that they not only neglect, but even become estranged from, physical things. When this happens, it pulls them further away from the goal of spiritual enlightenment—the realization of the Oneness of Being. It also draws them back into the negative viewpoint of our culture, which has conditioned us to think of the physical as mundane and vapid and the intellectual as superior.

For example, we generally give the jobs of cleaning, cooking, and farming to lower-class people, mostly women, and leave the jobs that are considered more important and more lucrative, like those in finance, law, and medicine, to those we deem higher-class professionals. But this overlooks the great value in attending to the physical and the basic, which are the foundation for the spiritual. As John Lennon discovered when he became a “house husband” and spent his days cooking, cleaning, and caring for his baby, “Life is what happens to you while you’re busy making other plans.”*

The third step—gardening—can encompass taking care of anything or anybody: feeling joy in contributing to nourishing another and seeing them blossom, becoming happy and healthy. You don’t have to have a plot of land in your backyard and grow lots of vegetables, particularly if you live in a city. You could have one rosemary plant in a small pot on your kitchen windowsill, or you may have a cat or a dog you take the time to feed well and provide for, thus improving their life. That animal may or may not live with you, might be a feral street cat or a dog who lives at the local shelter whom you visit regularly, volunteering to take them for a walk or bring them some special food. Through your caring they feel nourished and can blossom.

When I lived with my alchemy teacher, I also had a cat. Her name was Eva. I did not know enough at that time to feed her well. Basically, I would buy the cheapest box of kibble and sprinkle it in a bowl a couple of times a day. My teacher would say, “She is your cat, she is totally dependent upon you, you say you love her, so why not at least provide her with the best food possible?” I pooh-poohed him, as I felt I was doing my best. I wasn’t conscious enough to see his wisdom, but nonetheless he took it upon himself to cook for her. I laughed at him the first time I saw him kindly present her with a home-cooked meal, which she graciously and enthusiastically accepted. But within a few weeks I saw her change and become much more beautiful, healthy, happy, and vivacious.

The idea of gardening, which is in essence the caring for or nurturing of life, can also be extended to taking care of wild animals. You could feed the wild birds and/or squirrels who might live near your apartment, home, or workplace. You could hang a bird feeder out your window. Or if you live in an apartment in the city and your building doesn’t allow that, feed the birds on the streets, always remembering to bring a bag of organic seeds and nuts with you as you leave your apartment and distribute that food generously to the hungry birds and squirrels trying to stay alive in the midst of a city dominated by human beings. Ultimately, gardening is about taking care of something or someone and deriving pleasure by contributing to their well-being and seeing them thrive.

The three steps can also be a guide to yoga asana practice. Asana is often relegated to the status of menial labor—something one does merely to get in shape, as if that were less valuable than any other activity one might engage in. By paying attention to the basics—maintaining the seat of the asana (the connection to the Earth), proper alignment, breath, and intention—the practitioner can delve more deeply into the subtler aspects of the asana, which will make the practice much more powerful and yield more profound results.

Without mastering the seemingly ordinary basics of living, no spiritual maturity, much less real spiritual evolution, is possible. One must first grasp the magic in the ordinary before the extraordinary dawns, and once it does the everyday is never the same as it was before. It will take on a vibrant richness that was always there, but that you are now able to perceive and feel the joy of.