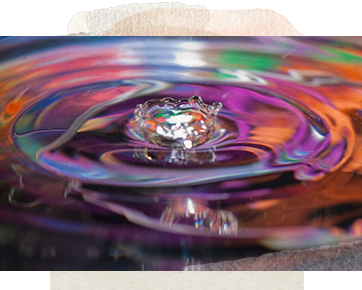 One hears the unstruck sound (anāhata śabda); the quintessence of that sound is the supreme object. On hearing that, the mind becomes one with that object of knowledge and is dissolved therein. What remains is the Supreme Self.

Nāda is classified into two forms: anāhata and āhata. Anāhata,” the unstruck”, is the vibratory primordial sound of creation that requires no friction to be produced. Also known as prānava, or Om (A-U-M), it is a sound perceptible only to our subtle spiritual senses. Āhata, “the struck” is sound produced by air molecules “striking” each other, for example, plucking a string, singing, air rustling leaves, etc, and is perceptible to the ordinary senses. Sound, śabda, is the most subtle of the panca tanmātras, the five subtle elements, which include smell, taste, sight, and touch, but can be the most powerful. Our auditory sense is the first to develop, in utero, and the last to leave in the human, physical experience. In the Yoga Sutras I:32, Patanjali states that when the mind is fully concentrating on a single object, in this case, sound, it can prevent obstacles that can impede the meditation practice. Meditation (dhyāna) precedes samādhi, where one is absorbed and “becomes one with the object of knowledge” that brings us eternal bliss. Ancient ṛṣis (seers) are aware of this and fine-tuned their listening capacity with such intensity that they “heard” sacred teachings and revelations, what is known as the Vedas, which are considered śruti, what is heard.  To fine-tune our listening capacity towards the supreme knowledge of anāhata, we can start by practicing mindful listening to āhata nāda, like sounds in our environment, sounds of nature, our voices, breath, sacred music, singing bowls, etc. Āhata may not be available for individuals with physical auditory limitations but the anāhata is accessible to all.

Sound is formless, nameless, and non-dogmatic and can keep our saṁskaras at bay so we do not attach our personal narrative to it, which creates a quieter inner landscape. Meditation on sound, as well as mantra, allows us to move deep within and silence the mental chatter that incessantly disturbs the mind. Music can offer the same experience. Indian rāgas, musical phrases using different configurations of notes from the Indian sargam (musical scale), are used accordingly depending on the bhava (mood) desired, the different times of the day and the seasons. For example, the rāga Bhūpālī is a tranquil soft melody that creates a deep and soothing atmosphere and is sung or played in the earlier part of the night; the rāga Bhairava, is the known as the Song of Ṡiva and according to mythology, it was the “ādi rāga” – the first scale, and expresses supreme awareness and played or sung in the morning. Lyrical music with inspiring and uplifting words can induce an elevated state of mind for those of us who enjoy and can better connect to higher states of awareness through context and content.

We live in an energetic and vibratory universe. Research in quantum science has shown us that atomic particles – neutrons, protons, electrons, and sub-atomic particles like quarks are really vortices of energy. Everything in this universe is energy and vibration from the most gross to the most subtle. The vibrations we are exposed to can have immediate and obvious effects on us. For example music can be completely inspirational and create the perfect mood. With the right music, difficult asanas become effortless. As inherent energetic and vibratory beings, humans have the capacity to recognise and connect to energy and vibrations that are external to us, through sound. That recognition and acknowledgment allow us to realise what is within. When we can feel, hear, and in some instances, see the sound, there is an alignment between the energetic vibration of our inner and outer environments. That alignment informs us that we are one with the vibratory cosmic universe.

“In the beginning was the Word and the Word was with God and the Word was God.” Bible, St John’s Gospel 1:1. “The Word” is synonymous with Om. Creation began with the projection of cosmic vibration from the absolute consciousness of God. This vibratory creative power produces a sound, which is Om. “The Word” spoken of by St John, is the ocean of cosmic vibration in which all other vibrations move like waves. The Vahara Upāniṣad, V:69-70, describes Om as “continuous, like smooth-flowing oil; the long peal of a gong. The one who knows that ever-new, ever-inspiring, unutterable sound knows Veda or all truth to be known.” Patanjali also speaks of God as Om. In the Yoga Sutras 1:27-28, he offered us the tool of meditating on Om to know God. Om is the projected creative power of God manifest in finite creation. To know and attain union with God is to be one with that Supreme Intelligence, which is offered to us through attunement with the anāhata nāda, that is Om.

If you would like to sing and play the chant of this FOTM on the harmonium, click here. 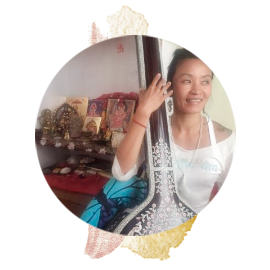