The Presence of the Present

Now, this is Yoga as I have observed it in the natural world.

The first word in the yoga sutra is atha. Atha is considered an auspicious word, a good sign, a benediction that sets a musical tone; it means ‘‘now,’’ referring to not later and not before. Thus, for one to experience yoga one must put aside thoughts of yesterday and tomorrow. This freedom, even if temporary, offers the possibility to observe Yoga in the natural world.

Once I was visiting some friends in the desert who were in the middle of a long silent retreat yet could receive guests once a year. Walking to one of the retreat huts, I realized that just in the way I was walking I was making a lot of noise. I started walking more mindfully, each step as quiet as possible in consideration of the surroundings. It was a joy to walk this way. As my concentration deepened, I witnessed the movement of the clouds and their formations. I noticed the flower colors and bird sounds and felt part of a landscape that I had visited numerous times before, and would again, yet it was the present that was now fulfilling. Like this, in the mental field of what is, not what was or will be, no matter how many times one has seen the same landscape, having seen it before will not diminish the fulfillment of the present at all. Later I went to visit another friend, whose hut was on a hill where high grass grew and where there was no clear path to reach it. I was told that with every step I took to tap a stick three times to warn the snakes. Indeed, I was careful. Not lost in thought, I moved slowly and with care as my awareness filled with a presence that was expansive and worthwhile. Through mindfulness, I arrived to the beauty that belonged to the flowers and trees, but more importantly, I perceived a divine presence that the plants were vehicles, expressions, messengers and manifestations of. Walking through a field of high grass is perhaps not the easiest way of walking, and the easiest way of doing things is not necessarily the most mindful or the most fulfilling. Today fields are mowed down, even paved, and mindfulness and its wisdom are declining. Yet the depth of our perception of the outer world mirrors our perception of what is within as well. Through mindfulness of others, we learn about others, and it becomes natural to see ourselves in them. Through this empathy the wish not to cause harm arises.

Each chakra is associated with a sense. One can be led into or away from the present moment through the senses. The feel of a mala bead passing through one’s fingers; the taste of prasad or the first sip of water upon arising; watching of a fruit ripen, a leaf change color or daylight decrease each day as winter approaches; listening to early morning sounds; or placing oneself in the atmosphere of Satsang are all ways in which a deep and poetic connection to life is sadly missed if one is not present, if one is preoccupied or is disturbed by a lifestyle that is unconscious, one that is often filled with negative emotions based on past traumas. Yoga gives the practitioner a chance to cultivate skills that can be used to work through old karmas so that past and/or afflictive, even unspeakable, experiences can serve as teachers or stepping stones to enlightenment rather than as an endless source of distraction, pain and disengagement. Yoga practices, when approached mindfully, result in an experience that is internal and forgiving. Such experiences reorient a person toward showing up in her life, in her relationships with people and with God.

In Tadasana, if one, ever mindful, presses down through the ball and heel of each foot, he realizes his arches. The sensation of well-being, stability, flexibility, elasticity, and quietude that this brings is nothing short of a blessing. At first, it may be easier to be mindful of a single task, like pressing the feet down or inhaling to the count of four, but eventually, one can move at any speed or undertake any number of actions simultaneously and mindfully. This is why an enlightened being can serve countless beings on countless planets at the same time.

The word sutra means stitch or thread. For those who sew as part of a spiritual practice, it is joyful because it is mindful. Especially as you get older and your eyesight worsens, it becomes more difficult just to get the thread through the eye of the needle. Within the down-under-up-and-across movement of the thread, its connection to the movement of the hands, one hand holding the fabric in place, the other guiding the passage of the needle, followed by the movement of the eyes as instruments for the sewer to see with, the sewer, the sewn and the act of sewing come together in a moment of absorption. In such a precious moment one is completely struck by the innate goodness and beauty of the natural world and thus is ecstatic by the awareness of what is 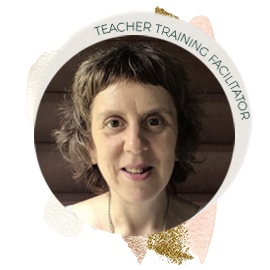