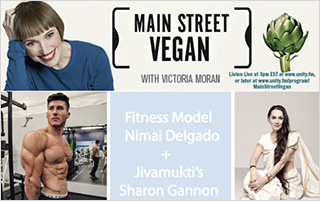 Nimai Delgado decided to begin training in 2015 for his first natural bodybuilding contest on an all plant-based diet after learning more about the animal injustices and health risks associated with the dairy industry. He won the entire show and placed first in all divisions. Although he has only been in the bodybuilding world for three years, he has graced the cover of Muscle & Fitness, been featured in James Cameron’s new documentary, The Game Changers. Nimai is already considered one of the top contenders and his passion for making a difference in this world is not going unnoticed.

Sharon Gannon is the creator of the Jivamukti Yoga method, a path to enlightenment through compassion for ALL beings. She is an author and animal rights/vegan activist. In her newest book, The Magic Ten & Beyond, she shares her personal home practice as well as her theory that yoga might have been practiced in ancient Egypt.