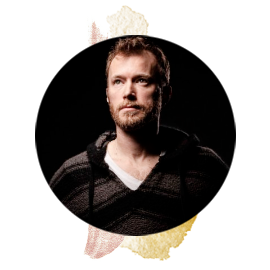 Chip is a Chicagoan, veteran, musician, comedian, scientist/alchemist, cyclist, and a 300-hr certified Jivamukti Yoga teacher. The yoga seed was planted in elementary school while reading a short story by Roald Dahl where the main character discovers yoga and meditation which leads to a transformation toward selflessness. This inspiration laid dormant for many years while society tried to fit a round peg into a square hole yet it never went away. He finally began practicing yoga in the mid 2000s but only sporadically. In 2014, he moved to NYC to pursue a career in stand up comedy and discovered Jivamukti Yoga as well. This was the impetus that led to him eventually becoming certified in 2018 and jumped right into teaching immediately. He has even began teaching yoga to preschool kids every week in Chinatown. He plans to fuse his passions for yoga, truth, knowledge, education, comedy, music, and art while entertaining children or helping other veterans. Peace and Love to All