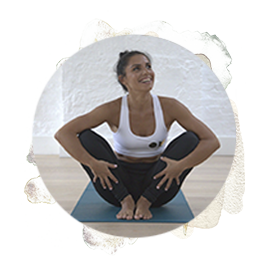 Dannii’s interest in sports and physical fitness has shaped most of her life. Of Bulgarian and Greek origin, she came to London in her mid-teens and embraced its diverse spirit. Prior to focusing on yoga she trained in power fitness for six years. In her mid-20s she was introduced to Jivamukti yoga and this opened a whole new world. Finally Dannii could combine her passion for health and fitness with the spiritual powers of yoga, where the mind and the body together create an equilibrium. Dannii completed her 300-hours Jivamukti Teacher Training in early 2015 at the Omega Institute for Holistic Studies in the United States and her 200-hours Sangye Yoga Teacher training in 2017 in London. Dannii continues to study the path of yoga not only as a teacher but as a student attending regular classes and workshops which inspire her teachings.

For Dannii Yoga is a path to enlightenment while living in this human form – which is what “Jivamukta” is. A liberated soul and a path to enlightenment through compassion for all beings. Jivamukti is a physical, ethical, and spiritual practice, combining vigorous yoga as exercise and a vinyasa-based physical style with adherence to five central tenets: shastra (scripture), bhakti (devotion), ahimsā (nonviolence, non-harming), nāda (music), and dhyana (meditation). Yoga is also practicing Abhyasa: Abhyasa means persistent effort to attain and maintain a state of physical, mental and spiritual tranquility. Dannii deeply believes in the transformative power of yoga and its ability to bring harmony, health and happiness to all.