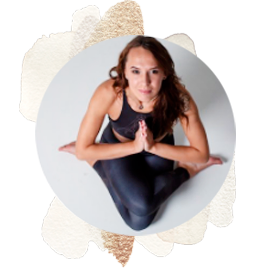 My name is Lena and I was born in Russia. Now I am 29 years old. I have been doing yoga since 2012. I was studying at the “yoga_method” instructor course in Russia in 2015. After completing the course, six months later I began teaching Hatha yoga. From 2016 to 2017, I was studying at the teachers course in the Yoga Federation of Russia. After passing the exams in philosophy, anatomy and teaching, I continued to teach group, corporate and individual Yoga classes. In 2019, I had completed 240-hour training on the course of instructors “Acharya”, having received a certificate entitling me to teach yoga in groups of primary and secondary level. I am practising yoga in NYM yoga studio, Material Yoga Studio and at home. Also I attended yoga seminars of Jules Febre, Jessica Stickler, Hachi Yu, Jai Sugrim and Dechen Thurman, Anna Lunegova and Olga Oskorbina at Moscow.