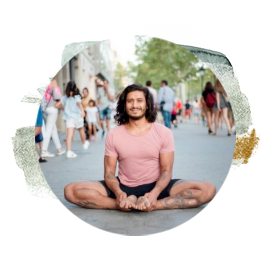 Jai Sugrim is an advanced certified Jivamukti yoga teacher, athletic trainer, public speaker and recognized men’s health expert. He has a scientific approach for bringing the human body and mind into harmony. Jai has worked with many professional athletes, including the New York Yankees, during the 2000 and 2001 seasons. He earned a 2000 world series championship ring as the Yankees defeated the Mets in the subway series. As a spiritual guide and health educator, Jai enjoys sharing his healthy lifestyle and the enlightened teachings with students through his international retreats, speaking engagements, teacher trainings, television appearances, one on one coaching, corporate wellness programs, and his writing.  He is the creator and host of “Yoga Sutra Now” a 65 episode tv show which aired in 95 million American homes and 20 countries internationally. Jai has been featured on The Today Show, in The New York Times, and Psychology Today.  He is grateful for the opportunity to teach practices that lead to self awareness.