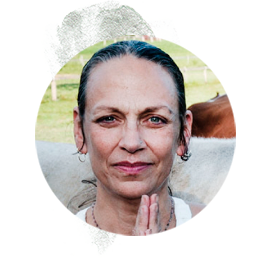 Her teachers and founders of the Jivamukti Yoga method, Sharon Gannon and David Life, granted Julie Kirkpatrick Advanced Jivamukti Yoga Teacher certification in 2005. David Life is Julie’s brother, so the method has been accessible to her since its inception in 1986. Julie has been and continues to be a student of the method since that time. She completed her 300 hr. training in 2003, and her 800 hr. training in 2004. Her association with Jivamukti Yoga has allowed her to teach abroad in Germany, Italy, Czech Republic, Spain, Turkey, Canada, and Vietnam, as well as in the United States in New York, New Jersey, Virginia, Michigan, Florida, Illinois, Pennsylvania, Alabama, Tennessee, Louisiana, and Ohio. Julie has taught open, basics, prenatal, and children’s yoga classes at Jivamukti Yoga School in New York City. She assisted and taught at the August classes held at the Wild Woodstock Jivamukti Forest Sanctuary in Woodstock NY for 5 years. She has assisted Sharon Gannon and David Life at various times serving both as house sitter and cat caretaker to classroom assistant while they teach. Currently, Julie is teaching full time between Jivamukti NYC, Jivamukti Jersey City, and Yoga People, Brooklyn, NY. Before focusing full time on teaching yoga, Julie worked in public education, visual arts, and community gardening. She was an activist for fair housing and preservation of community gardens on the Lower East Side of New York City, where she has lived with her children Jules and Alex Febre since 1981.