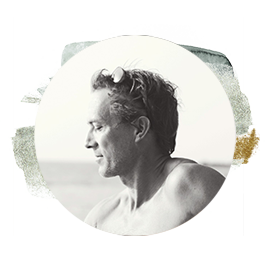 Karl Straub lives in Zurich, Switzerland, but he was born in the US where he enjoyed meditation, singing, and swimming from an early age, He graduated from Duke University, and worked as a dolphin communication researcher, science teacher, and IT director. He established one of the world`s first web-hosting companies in 1993, and made a life-changing decision in 2005 to leave a steady business career to delve deeper into meditation and yoga. He donated to charity most of his belongings, gave up his apartment in Manhattan, and set off on an odyssey of 8 years during which he kept no apartment anywhere, and traveled just with what he could carry. He studied with masters of various traditions including David Life and Sharon Gannon, Keido Fukushima, Swami Bua, and Richard Freeman, who inspired with their depth, precision, and humor — qualities he emulates in his own teaching today. He has taught at events in over 40 cities in 12 countries. Karl lives in Zurich, and gives weekly classes in studios and online, plus retreats on Mallorca and in Switzerland, as well as workshops and trainings around the world. More info: karlstraub.com