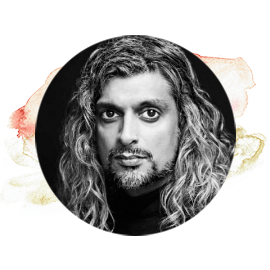 Kazim Ali received his 300-hour certification in 2012. He has been practicing Jivamukti Yoga since 1999. In addition to teach in the United States he has offered yoga teachings regularly in Ramallah, Palestine. As a poet and writer, Kazim is particular interested in the way that yoga practice and philosophy can feed creative practices. He offers workshops in yoga and writing and is on the faculty of Oberlin College teaching in both the Creative Writing and Comparative Literature programs. He has published more than fifteen books of poetry, fiction and essays and is currently working on a book called Mountain of God: Teaching Yoga in Palestine.