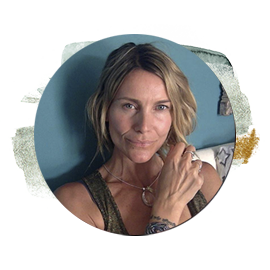 I was born the 11 of December of 1974 in Barcelona, Spain. I’m Sagittarius Pisces ascendent and moon in Scorpio. My name is Marta Lasheras, many call me Madhú meaning nectar in Sanskrit. I have been teaching yoga based on my own experiences since 2008. My mum introduced me to the practice, she used to practice hatha yoga in the late 60´s and early 70´s in Barcelona when yoga was not popular as it is these days. I have a free artistic nomad spirit and i have studied, worked and lived in Barcelona, Madrid, Tenerife, Cádiz (Spain) , NYC (United States), Toronto (Canada), Santiago de Chile (Chile), Udaipur (Rajasthan, India), Maldives, Bali and Java (Indonesia), Antwerpen (Belgium) and now i live in the South of Spain and travel all over the world.​I started teaching yoga after completing the 300 hour Jivamukti Teacher Training with my foundation teachers Sharon Gannon and David Life in the Omega Center in NY while still working for the intrepid advertising and later on cinema industries for more than a large decade. Later on I was trained by an ex-publicist Luis Platón and Michie Kuwasima from Spartner, a wellness consultant company based in Barcelona. Later, I had the opportunity to direct Spas around the world. More recently i have attended a Raw Food Chef Training at Radiantly Alive, Bali and several workshops with Duncan Wong and Meghan Currie. I’m the author of Lolita and Chaplin Secrets, Magia, Cambia de Percepción and Lolita and Chaplin. La Tournée.