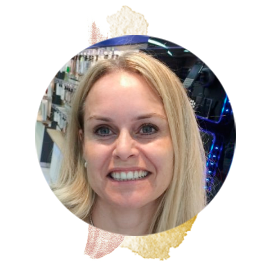 Pınar started practicing hatha yoga in 1988 in order to relieve back pains due to scoliosis, while she was studying in Massachusetts, USA. Her faith in yoga flourished after 6 weeks of intense yoga practice as her pains started to vanish. This marked the beginning of her yoga life. In 1989, she attended Teacher Training program at Kripalu Center of Yoga & Health in Lenox, Massachusetts. In Massachusetts and Washington D.C., she attended various yoga workshops which allowed her to learn various dimensions of yoga. During her first pregnancy in 2000, she personally lived the benefits of prenatal yoga during her pregnancy and childbirth. She started teaching hatha yoga full-time as well as starting the pre- and postnatal yoga programs with Güven Hospital. She has founded Yogamma, her own yoga studio in 2004. In July 2005, in Edinburgh, Scotland, she was introduced to Ashtanga yoga attending David Williams’ Ashtanga for Life workshop. She loved Ashtanga so much that she completed the teacher training program of Ashtanga yoga, Primary Series with David Swenson at the same yoga center in Scotland, in December 2005. In August 2006, at Kripalu Center of Yoga & Health, she attended Ashtanga Mela with David Williams, David Swenson and Danny Paradise, the yogis who brought Ashtanga yoga to the West. Being involved in Ashtanga and Vinyasa Flow yoga, she has attended the Vinyasa Flow Teacher Training program of Seane Corn at the Kripalu Center. 2011 – Graduated from Dr. Georg Feuerstein’s 800-hour Philosophy, History & Literature of Yoga of Traditional Yoga Studies, 2012 – Became a Jivamukti Yoga Instructor upon completing of 300-hour Jivamukti Yoga Teacher Training in Dorset, England, 2016 – Became a Ayurvedic Life Style Consultant upon completing Dr. Frawley’s 300-hour Ayurvedic Healing Course of American Institute of Vedic Studies, 2017 – Became a Yoga and Ayurveda Healing Consultant upon completing Dr. Frawley’s Yoga, Ayurveda, Mantra and Meditation course of American Institute of Vedic Studies, 2017 – Became Rasa Yoga Instructor after completing Sienna Sherman’s Rasa Yoga On-line Teacher Training Course. Pınar, is an E-RYT500 yoga instructor of Yoga Alliance. She is the Lead Trainer and owner of YogaŞala Ankara. To this date, she has trained more than 300 students since 2008.