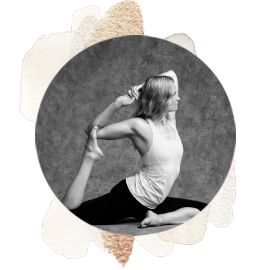 Stephanie trained in Classical Ballet for several years before she began to practice Yoga with Advanced Certified Jivamukti Yoga teacher Moritz Ulrich. From 2011 on Stephanie has stayed several times at Sivananda Yoga Ashrams in India and took part in many Yoga workshops with Sharon Gannon, Jules Febre, Patrick Broome and amongst others. In June 2016 she completed the Jivamukti Yoga Teacher Training in Blue Spirit, Costa Rica with David Life and Petros Haffenrichter. Stephanie values the alignment of body and mind, and the clarity which yoga gives her and seeks to pass on this clarity in her classes.