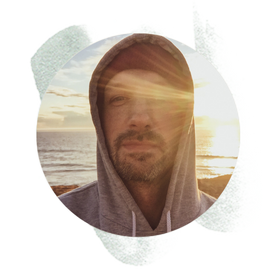 His first contact with yoga was not in a Shala but on a Festival, where he saw a headline performance of the band “Shelter”, which inspired him a lot to dive deeper into the philosophy without putting a foot on a yoga mat but in a Dojo where he practiced WingTsun KungFu for years – luckily his Sifu was also a Yoga teacher who brought the philosophy into the training. Years later during a surf trip to Sri Lanka, he took his firs Hatha Class with chanting, meditation and a strong asana-practice that hooked him. So he continued to practice Yoga in Hamburg and also took classes and Immersions with Moritz Ulrich where he fell in love with the Jivamukti Practice. Still indecisive of doing the whole training he took his 300hr with Raghunath at the Govardhan Eco Village but two years later finally he joined the Jivamukti Teacher Training (online) with Moritz Ulrich and Yogeswari, which felt 100% right. Thomas feels blessed to be part of the Jivamukti Yoga Community and is forever grateful for his teachers Yogeswari and Moritz Ulrich, Sharon Gannon and David Life as well as Raghunath and Kausthuba Das.