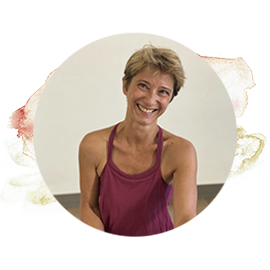 After exploring many styles of yoga, I discovered Vinyasa style classes with music in Mexico in 2006 and pursued my first teacher training in Baja in 2008 in Hatha/Vinyasa.
I was first introduced to Jivamukti in 2009 in Paris by attending a 2 days workshop with Petros Haffenrichter. I instantly fell in love with the practice, especially because of the spiritual and philosophical aspects and the Bhakti part. A few months later I went on a retreat in Crete with Petros. I will always keep in my heart the moments of Kirtan at sunset with all the musicians, where I felt so much joy. I knew by then that it would be the Jivamukti Yoga method I would teach one day. 11 years later (I have a full time job in Corporate Social Responsibility) I managed to pursue the TT in India in february 2020 with Jules and Rima. After starting classes on Zoom during the confinement I’ve been teaching since september 2020 in Paris and iin Bordeaux where Jivamukti wasn’t’ known nor taught before. Alongside yoga I also explore and pursue trainings in sound-healing, shamanism and permaculture with a retreats projet starting in Dordogne called “All is one Yoga”